A tale of two Olympians on International Day of Friendship

This International Day of Friendship we’re celebrating the journey of two Olympians - Peter Bos OLY (USA) and Kraft Schepke OLY (Germany) - who reconnected more than 50 years after competing against each other at the Rome 1960 Olympic Games.

Competitors in the Men’s Rowing Eight, Peter reached out to Kraft during the Olympic regatta to find out why the German team had improved so much and so their friendship began over dinner in the Olympic Village. At the end of their final race the two swapped shirts as a show of respect but then lost touch. It wasn’t until many years later that they reunited and are now closer than ever.

Once on opposite sides, as renewed friends they even teamed up to win an 80-84 age division race at the 2018 World Rowing Masters Regatta.

Reach out to your previous competitors or teammates and reignite your #OLYBond on this International Day of Friendship. We would love to hear how you’re reconnecting with your Olympian friends so tag us on Facebook and Twitter to share your stories or write to us via info@thewoa.org. 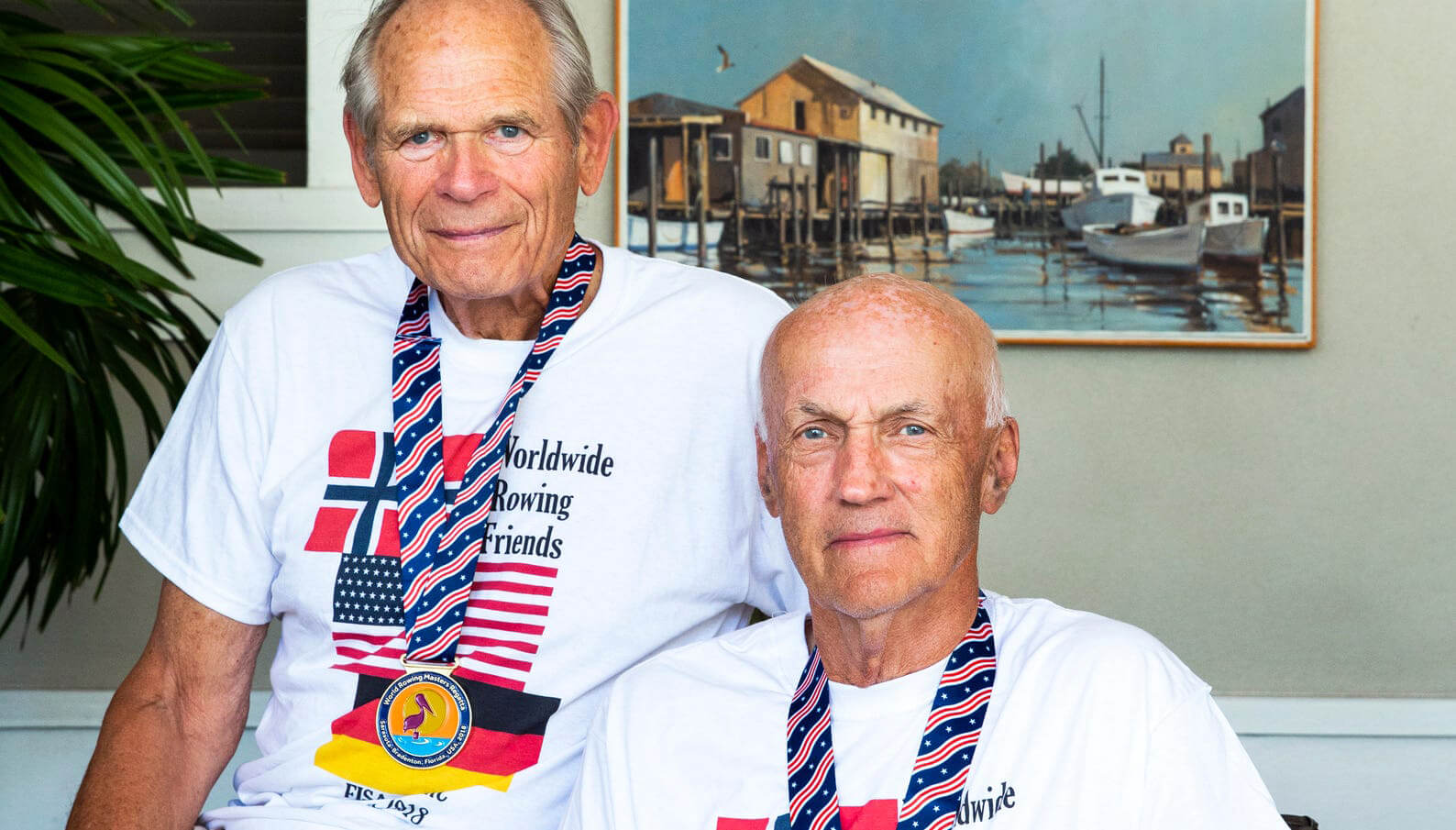 How did you first meet?

Peter Bos OLY (USA): “The German crew in 1960 had a wonderful and impressive record and I wanted to find out more about their new training techniques so I sought out Kraft - my opposite number five in the German crew. I met with him for dinner in the Olympic Village and he was quite willing to discuss this with me, which I appreciated. There was mutual respect.”

Kraft Schepke OLY (Germany): “In Rome we were very aware of the other teams, especially the Americans, who had been the favourites for so long, so we were keen to find out what they were up to. I was pleased to meet Peter to learn more. After the race - when my crew had won the gold - I saw Peter again and we exchanged shirts. That was the beginning of our friendship but we lost touch after the Games.”

How did your reunion come about?

Kraft Schepke OLY: “One day, a few years ago, out of the blue, I got an email asking me if I was the number five from the German Olympic crew in Rome. It was Peter. Shortly after that a package arrived in the post from Peter with my Olympic shirt, which he had returned to me after more than 50 years. 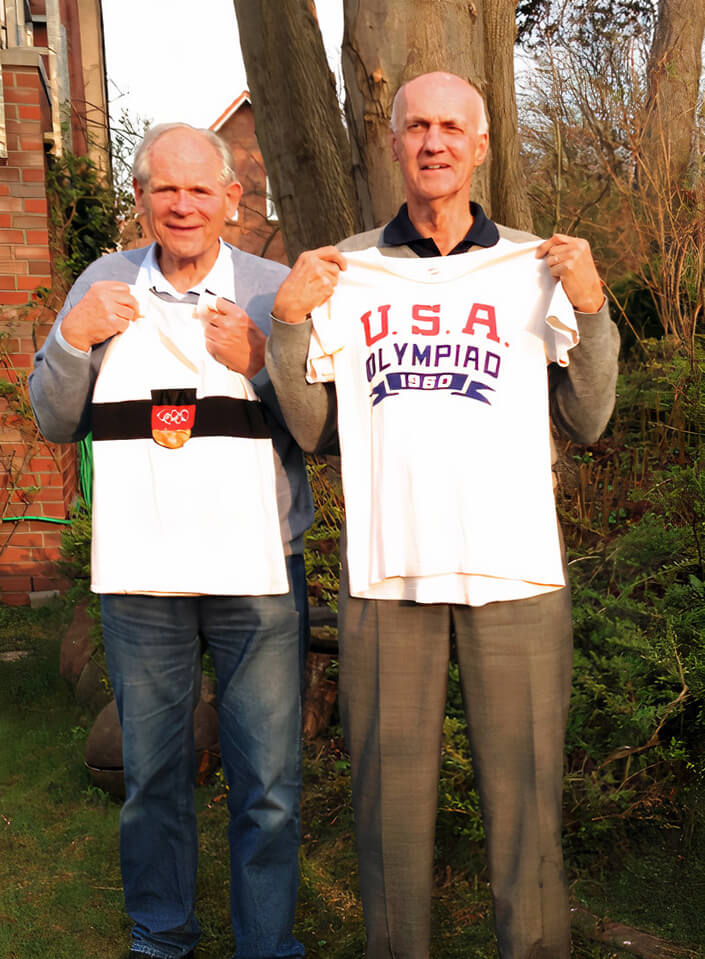 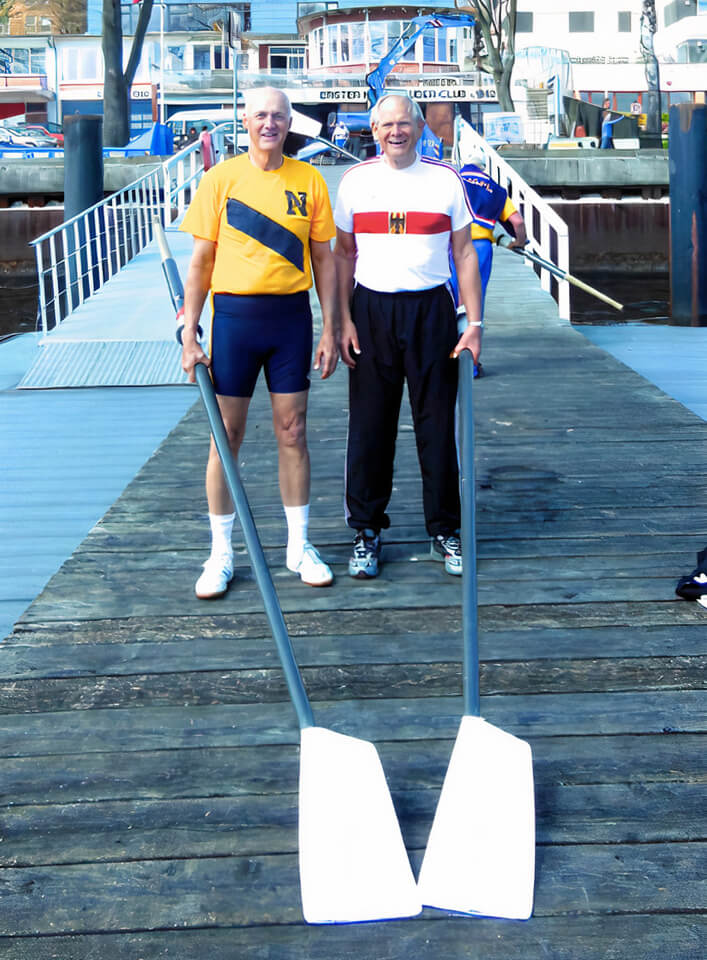 Tell us about the significance of the shirt?

Peter Bos OLY: “It was actually Kraft’s racing shirt from the final in Rome - the gold medal winning race that Germany won. Kraft came up to me after the race and handed it to me - it was a magnificent gesture. His sportsmanship stayed with me.

“Not long after the 50th anniversary of the Games, I was looking at the shirt at home and I got a little emotional thinking this should be with Kraft’s children so I tracked down his email address and got it back to him.”

Did you eventually meet again in person?

Kraft Schepke OLY: “I invited Peter and his wife to visit us in Germany as part of a European trip they had planned and when he arrived I repaid the honour he had shown me and returned his Olympic shirt to him.”

Peter Bos OLY: “We spent a lot of time reminiscing and sharing our memories and experiences of Rome. I also learned about what Kraft had done since the Games and I was impressed by his commitment to sports administration, his belief in international competition and to friendship through sport.” 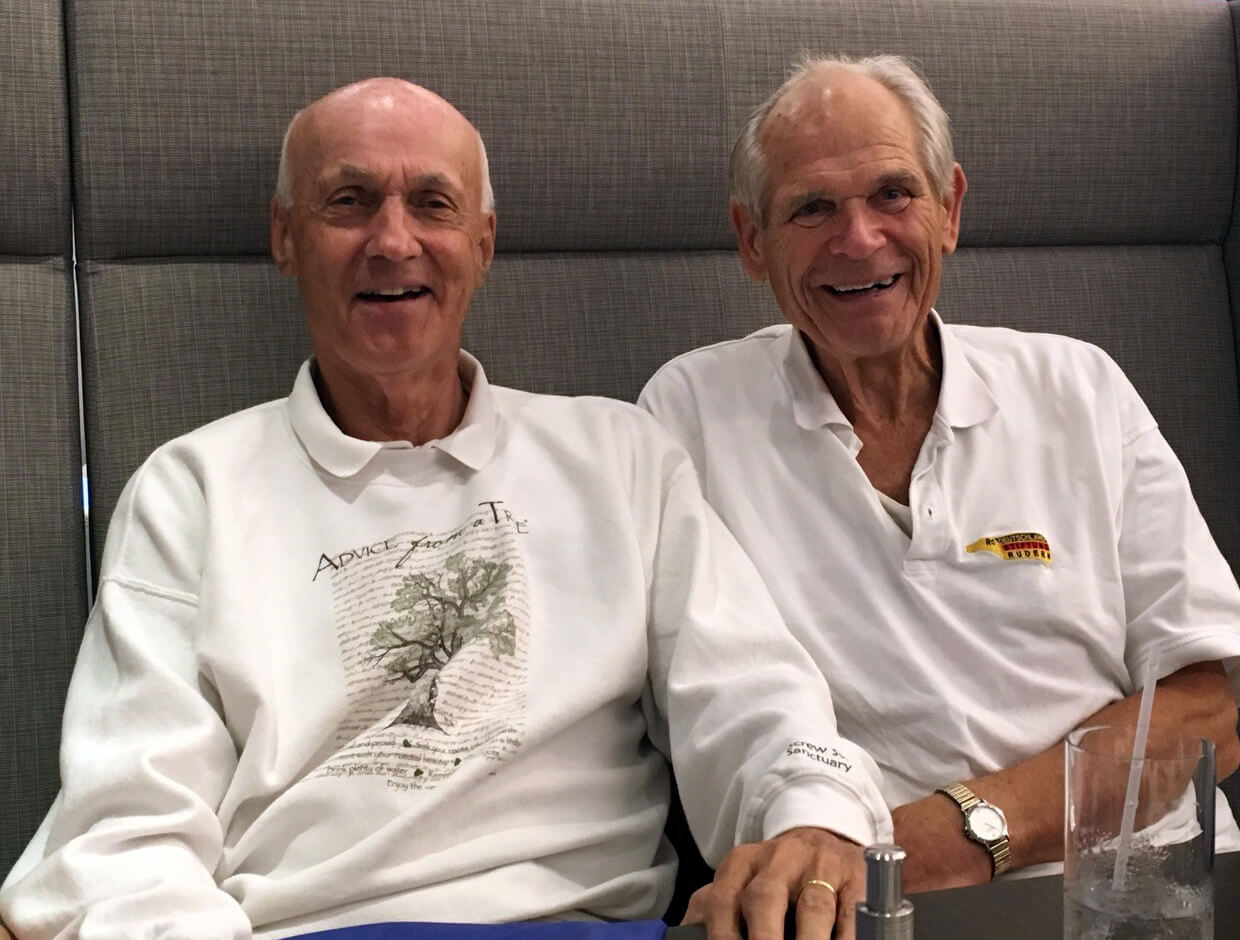 Why is it important to stay connected to other Olympians?

Peter Bos OLY: “When we’re young we don’t realise how important it is to reach out to friends and particularly for Olympians to reach out to other Olympians. I regret not reconnecting with Kraft sooner. Meeting people from other countries, from other cultures and understanding and appreciating how they live is very beneficial.”

Kraft Schepke OLY: “I find it very enriching. After we had reunited, Peter visited me in Germany and I visited him in Boston and now we remain close friends. We even competed in the World Rowing Masters Regatta together. First we were rivals and now we are teammates. After more than 50 years, we are sitting in the same boat together. What a great symbol.”

What was it like being teammates after all those years?

Peter Bos OLY: “As boys our countries were at war, in our twenties we were Olympic competitors, 50 years later we became close friends, and ultimately, in this race at the World Rowing Masters, we became teammates. When we got on the water, that feeling of rowing together was unbelievable.” 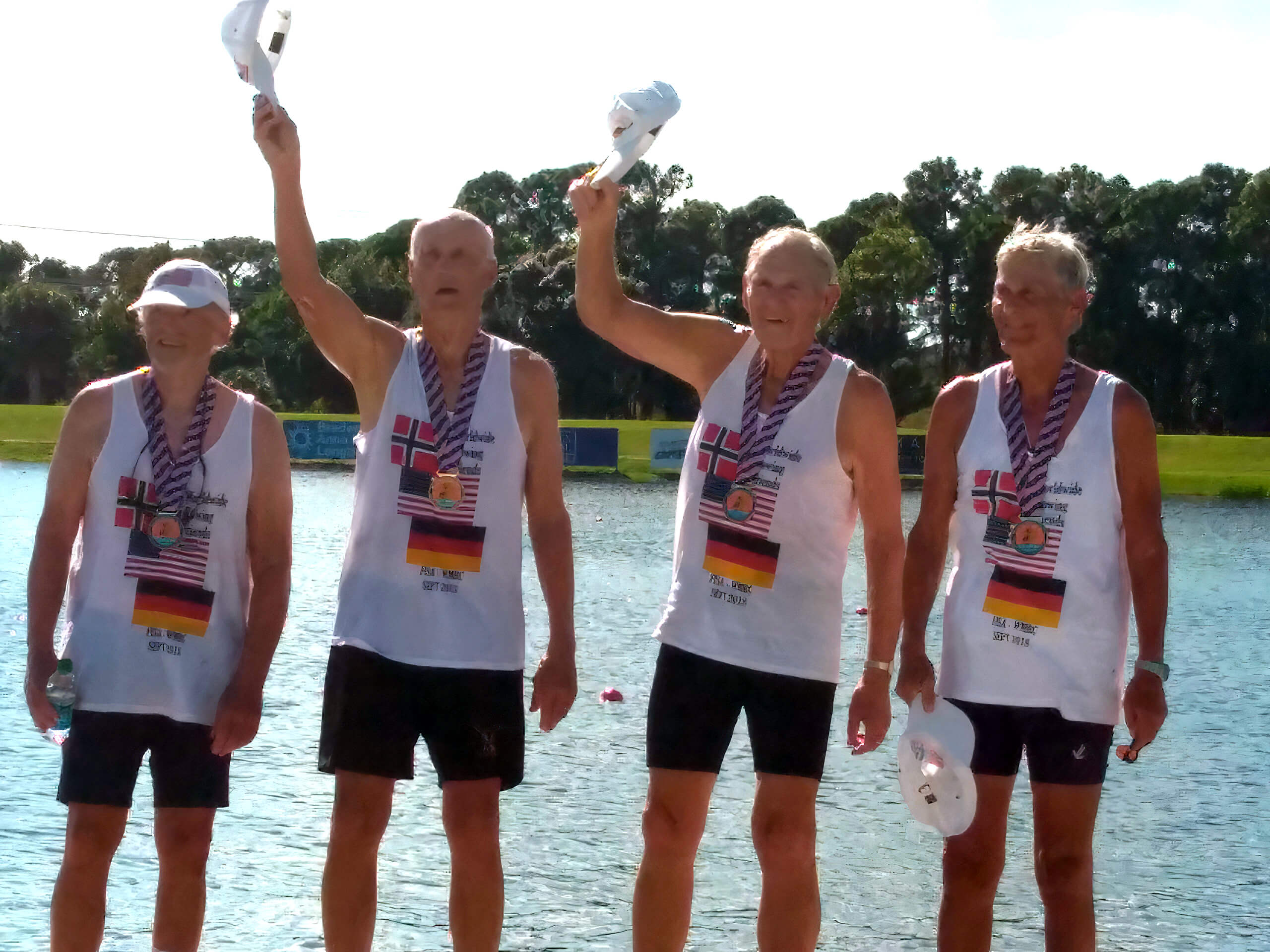 You’ve even had a book written about your journey - AFTER THE RACE: A Tale of Two Olympians - tell us about it?

Peter Bos OLY: “It’s an illustrated book of our story that we hope will inspire young people throughout the world.”

Kraft Schepke OLY: “It shares an important message about the Olympic Values and about not giving up. Children, especially, look up to Olympians so it is a good way to teach them to work hard to achieve their dreams. Not just in rowing, not just in sport but in life.”

To order a copy of the book please go here.

Illustration and animated video by Mei Li from AFTER THE RACE: A Tale of Two Olympians by Alec Sokolow and A.D. Lubow. Based on the true story of Peter Bos OLY and Kraft Schepke OLY.

What is your message for International Day of Friendship?

Peter Bos OLY: “I want to tell Olympians to reach out and stay connected with their fellow athletes because you never know what might come of it in the future. I would say to them, the Olympic finish line is just the start.”