German Olympians seek to claim their place in reunification debate

The German Olympians Association is leading calls for athletes to have their say in the ongoing debate surrounding sport in Germany following the country’s division and subsequent reunification, and the impact it had on the nation’s athletes.

More than 140 German Olympians gathered in Braunschweig, Germany, to take part in the German Olympians Association General Assembly and Forum on 23-24 June in order to exchange ideas and share experiences. Under the theme “Das bleibt für immer” (this lasts forever), the Forum looked at the significance placed on Olympians in German society. It highlighted the important role Olympians can play supporting community engagement and helping to create a more harmonious world, while recognising that once you become an Olympian you hold that status for life.

This year, the Forum reflected on identity and sought to understand past experiences and the differing perspectives of the Olympians gathered. In particular, those that competed under the separate flags of East and West Germany prior to the country’s reunification, as well as competing together under one flag after the 2nd World War before the erection of the Berlin Wall.

Christian Breuer, President of the German Olympians Association, said that while it was difficult to discuss it was important for Olympians to start the internal debate amongst athletes on that period of sporting history. He also felt it was vital for Olympians to play a more central role in the wider discussion around this issue, which is currently being debated in German society.

“It is really a tough topic but in Germany at present it is the media and sporting officials who are being invited to debate it - not the athletes themselves. But we are the ones that have to look each other in the eyes to understand and even forgive.

“There is no place for division within the German Olympians Association, only unity – we do not label people east, west, north or south, medallists or non-medallists. We are all Olympians. But we must understand our history and start talking about the past in order to move forward.

“One of the actions to come out of our General Assembly is that we want to create a project that reflects on and promotes awareness and understanding about the past by sharing the experiences of Olympians who grew up in different political systems and the impact it had on their lives. We are determined to come together as Olympians to build bridges and tell the story from the athletes’ perspective.” 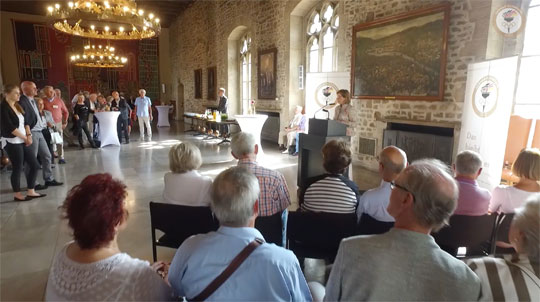